"I recommend The Fifth Dimension for middle school - watching episodes of The Twilight Zone and discussing . . . We also have programming for preschoolers and elementary and youth spread throughout the week but Fifth Dimension is by far the most popular."

"Fifth Dimension is by far the most popular curriculum we use.  We offer it every other year for middle school, and the volunteers love it.  It's easy to use, engaging, and still relevant after all these years!" 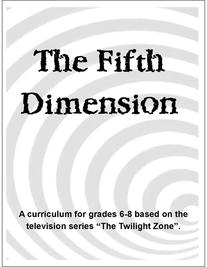 The Twilight Zone tackled a diversity of social issues and political statements not seen in shows of its time.  Its creator, Rod Serling (himself a Unitarian), believed that controversial messages and dialogues were needed to get a point across, and purposely created a science fiction show to get such messages past corporate censors.  The result was five seasons of timeless episodes that resonate as strongly today as they did in the late fifties and early sixties.

The Fifth Dimension uses episodes of The Twilight Zone as the basis for in-depth discussions of a wide variety of topics. At each class, an entire episode is viewed, a distinct advantage when discussion is the intention.  After viewing, the class engages in discussion and activities, designed to encourage deep contemplation of issues.

This curriculum is very easy to teach and to administer.  The lesson guide provides an outline of each episode followed by discussion questions and activities.  It is entirely possible to lead a class with minimal preparation.

Students are quickly,  and deeply, engaged in the topics, and become active participants in class discussions.  Students react with enthusiasm, generating provocative discussion and interaction.

For directors and coordinators, the episodes are easy to obtain.  All are available through streaming or on DVD.  Streaming provides the most economical way to purchase individual episodes, costing only a couple of dollars each, and with episodes currently free for Amazon Prime subscribers.

Lessons are appropriate for either a classroom or youth group setting.  Included with your purchase are PowerPoint presentations that can be edited as needed.  PowerPoint has proven to be a valuable tool with this age group to keep the class engaged.

To purchase digital episodes for streaming, go toAmazon, choose the season from the drop-down menu, and the individual episodes to purchase and add them to your Amazon cart.

If you prefer to purchase DVDs, a list of what DVDs will need to be purchased can be viewedhere.