Although most parents believe social action is important for children, and most children have a natural desire to make the world better, it can be difficult to find meaningful and relevant social action experiences for tween-age children.

Harry and UU is based on the Harry Potter series of books by J.K. Rowling, books that immerse children in the idea that one can work to make the world better.

The curriculum spends about four classes on each Horcrux fight, with three classes devoted mainly to education and small projects, and one class devoted entirely to action.  The goal is to produce tangible results on seven real-world problems.

In addition to the wizarding activities and Horcrux fights, additional games are included that can be used for All Ages days or parties, allowing the Harry Potter theme to be spread throughout the congregation. 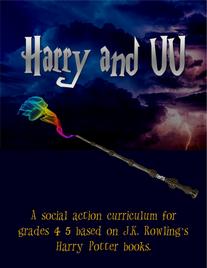 This year, Follen Church wanted to re-invigorate its programs for older elementary and middle school classes – and hopefully boost participation and attendance.  We ordered “Harry and UU” and “D’Oh God!” and were thrilled with the response from our youth:  attendance bounced up, creativity soared, and the discussions were deep and values-based.  Thank you, Karen Hager, for creating curricula that have made a difference in Follen’s religious education programs!
~ Deborah Weiner, Interim Director of Religious Education, Follen Church UU, Lexington, MA

Your class will form a chapter of Dumbledore’s Army and will fight seven real-world Horcruxes throughout the year, much like Harry and his friends fought Voldemort’s Horcruxes.  Although any wrong that needs to be righted can be chosen as a Horcrux, this curriculum provides the outline for seven Horcruxes found to be relatable to children, and to be ones in which tangible results could be obtained.

The Horcruxes provided are:

Also included is a bonus Horcrux, The Hatred Horcrux, added in response to recent activities of hatred in the United States.

Instructions are provided for customizing the Horcrux fights for your class and geographic area, as well as how to create your own Horcrux.  There is also a template included for a Disaster Horcrux, intended to allow your chapter of Dumbledore's Army to provide help to a disaster, should one occur during the year.

Your chapter of Dumbledore's Army will be capable of producing amazing results!

Here is what one class of 4th and 5th graders were able to achieve in 9 months: