To use Minecraft online, you'll need to either set up a server or a world. The basic difference is that a server allows users to access the world at any time; a world allows the creator to control the timing of play. To stay within safe congregation guidelines and assure that there are always two adults online, most users will prefer a world.

All players will need to have their own Microsoft accounts, and probably already do have accounts, unless they are brand new to the game. A Microsoft account is needed to play on any bedrock platform. (There are two platforms: java and bedrock; java is used only for computer-based play and only by those on computers; bedrock is used for play on computers, mobile, and gaming systems.)

As always, I highly recommend finding your own high school or middle school technology expert to navigate Minecraft more easily!

What do you need? 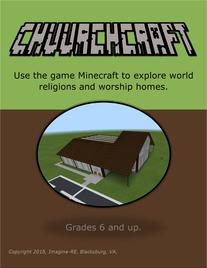 ChUUrchcraft was added to the Building Bridges curriculum at the Unitarian Universalist Congregation in Blacksburg, VA in 2017-18.  The curriculum had previously been used in 2015-16, and both classes had nearly identical registration numbers of 18 and 17 youth respectively.  The addition of ChUUrchraft resulted in an increase in average attendance rates for both classes and church visits by 2-1/2 times!  ChUUrchcraft got kids to attend!

And, what they learned - and created - was amazing!  Watch what this class created with ChUUrchcraft.

Many congregations engage in curriculum, church visits and other activities designed to teach participants more about the religions of the world, in support of our six UU sources.

ChUUrchcraft is intended to complement these efforts, serving as an addition to curriculum such as Neighboring Faiths[1] and Building Bridges[2].  ChUUrchcraft could also stand alone as a youth group activity or summer program.

ChUUrchcraft uses the popular app Minecraft as a vehicle for processing learned information on world religions.  A building with multiple rooms is created and supplied to the class.  As the class learns about a world religion, part of each class is dedicated to designing a room within the building, devoted to the practice of that religion.  Visits to other congregations will help inform the design of the room, which can be further supplemented with online research.

At the end of the year, the class will have created a building with rooms devoted to the practice of many religions, essentially a Unitarian Universalist congregation.

​ You DON"T need to be a Minecraft expert to use this curriculum! Watch below to see the building template included with your curriculum.